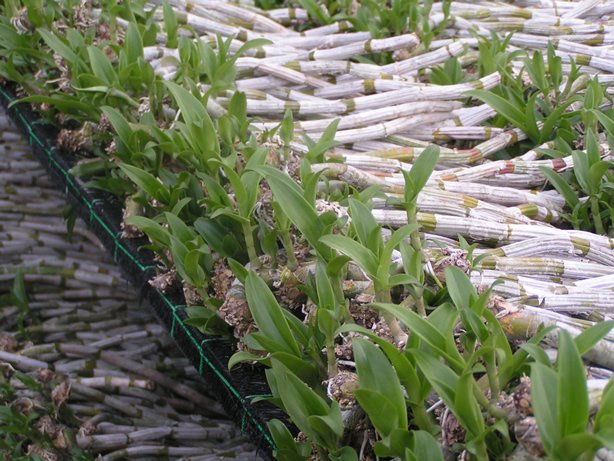 Keikis are young orchid plantlets, usually produced from old plant stock with low yield, to be used as new seedling stock for the next generation of nursery plants. Keikis retains similar genetics makeup from the parent plant and are more stable than mericlone in terms of genetics stability for the next generation of stock plants. Producing keikis from old orchid plants is a very simple process. In this entry, we will describe and share the methods we use for producing keikis for two varieties of orchids, namely the Dendrobium and Mokara. 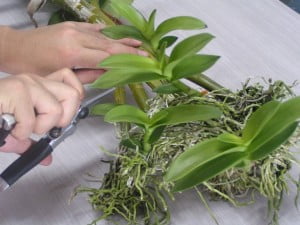 For Dendrobium, select old mature parent plants with low flowering yields. For best results, choose those with thick, turgid and succulent stems and exclude the rest with skimpy stems.

To be neater, the parent plant may be separated into individual stems as shown above, or left as a whole as shown below. Remove their leaves and trim the stem down to manageable size. Treat the stems with fungicide, particularly to areas which were trimmed and have open wounds, before drying the plants out in the sun.

After drying, lay the stems in neat rows, under 50% shade, as shown in the pictures below. Keep watering to minimum and apply fungicide regularly. The main objective here is to induce stress and shock to the parent plants so that they produce more keikis. 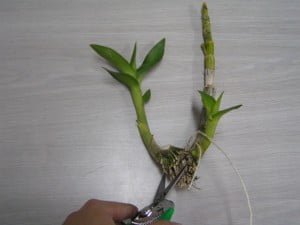 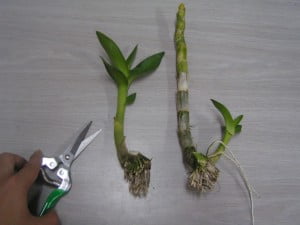 Keikis should start growing off primarily at the terminal end of stems within two months. Growth from nodes on stems may also be observed but in lesser quantity.

Towards the second month, fertilizers may be applied when new root growth from the keikis are observed. Keikis should be ready for transplanting within two to three months after the hardening process.

To transplant the keikis, use a clean shear and snipe off the attached keikis off the old parent stem. Note that the bulb of the new plantlet should not be damaged in the process.

Transplant the detached keiki in fresh charcoal and with care, it will eventually grow into a new orchid plant similar to its parent plant.

The method for producing keikis from Mokara is different from that of Dendrobiums. This similar method applies for most tropical Vandaceous plants which includes plants like the Aranda, Ascocenda, Aranthera and so on. 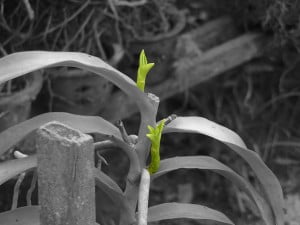 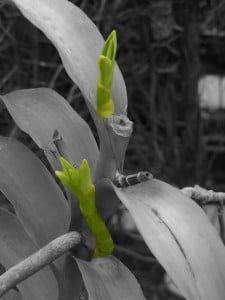 Treat the two portions with fungicide, particularly to the open wounds region. The top cut portion of the parent plant can be immediately replanted as a new plant. The remaining stump of the plant can then be used for inducing keikis.

Unlike the Dendrobiums, fertilization program for the stump portion of the Mokara should still continue as per norm. Setup the parent stump in 50% shade and keikis will grow from the axillary buds/nodes, which are usually found at the joints of the remaining leaves and stem, as shown in the picture on the right.

Theoretically, all the remaining nodes are capable of producing one keiki each, thus when the keiki hardens and produces root, it will be good to snipe them off if you would like more keikis to be produced. This would relieve the parent stump of its load and new keikis may be produced if there are still nodes remaining. This process will be good for about 6 months, after of which the keikis production will retard after the parent stump has drained most of it resources.

The keikis produced will gradually grow into plants similar to the parent plant.

No products in the basket.

Your wishlist is currently empty.